P2H2 News: Hydrogen on the Rise

COLUMBUS, Ohio July 15, 2020 – Hydrogen is on the rise. This carbon-free fuel and energy storage medium is the perfect antidote to our fossil fuel addiction, and the world is waking up to the great potential hydrogen has to power our lives without disrupting the climate. Investment in hydrogen is spiking with multiple new funds announced, including Pale Blue Dot, Chris Sacca’s Lowercarbon, and HydrogenOne Capital. With stronger commitments to reducing carbon emissions, Europe is leading the way. However, there is also action elsewhere with hydrogen-centric carbon neutral/negative goals from major companies such as Dominion Energy and Microsoft.

Here at Power to Hydrogen (P2H2), we are working hard to accelerate the transition to a hydrogen based clean energy future by radically improving access to and affordability of green hydrogen. Our efforts from the past quarter are described below.
Thanks to everyone receiving this newsletter for your thoughtful guidance and support. Be well.
Tad Dritz
CEO
Product
Development of Clean Energy Bridge (CEB) made significant steps forward including:
Markets
P2H2 is oriented to meet market needs.
Operations
Over this past quarter, our business and technology received important validation and we completed a number of activities to position P2H2 for accelerated growth.

About Power to Hydrogen

Power to Hydrogen (P2H2) is accelerating the transition to a clean energy future by improving access to and affordability of renewably derived green hydrogen and energy storage. With Clean Energy Bridge™, an efficient and cost-effective reversible fuel cell system, P2H2 generates hydrogen on-site and produces power when needed most, during peak usage and outages. 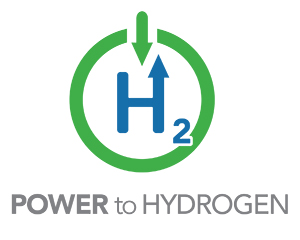